People who work on DIY projects and woodwork regularly use a table saw. A table saw, also known as a bench saw, is a power tool that has many applications.

In its most basic form, a table saw is simply a cutting tool with a rotary saw blade or a spinning blade emerging from the center of a work table or surface that is completely flat. It is designed to cut wood and other solid materials such as sheet aluminum, sheet brass, and sheet plastic.

It is made up of a circular saw’s blade seated above an arbor and powered by small induction or electric motors ( either by gears or belts). 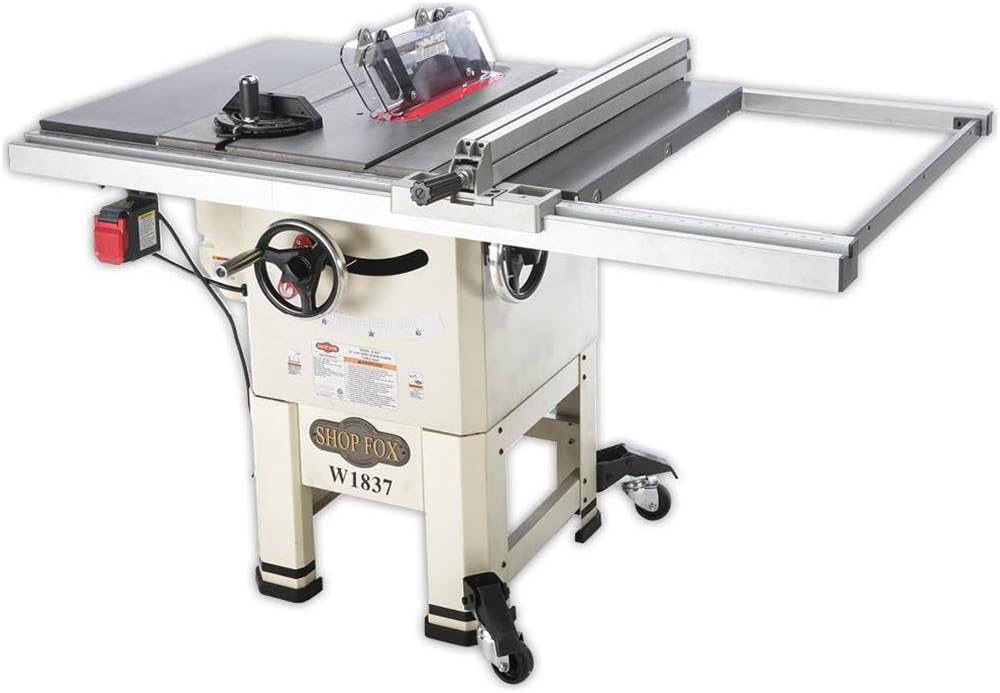 The saw blade protrudes from the tabletop, supporting the material being cut, and it is most commonly used to cut wood.

Table saws are extremely useful and versatile tools to have in your home or workshop.

The Blade Of A Table Saw

Choosing the right blade for your power tool can be difficult. What blade to buy depends on the application of the table saw and the materials to be cut.

Before purchasing a table saw blade, consider the following:

Fewer teeth mean a lot of material will be removed, while more teeth mean smoother cuts.

The tooth angle is the bend or angle of the tooth in relation to the center line of the blade. The tooth angle can be positive or negative, affecting the blade rotation direction and aggressiveness.

The basic design of table saws is generally uniform and basic, allowing for efficient and safe basic cuts.

There are several types of table saws to choose from, each with a unique set of features.

Different features, such as blade size and accessories, will affect the final cost of the saw, with contractor saws being the more expensive models.

The various types of table saws include the following: 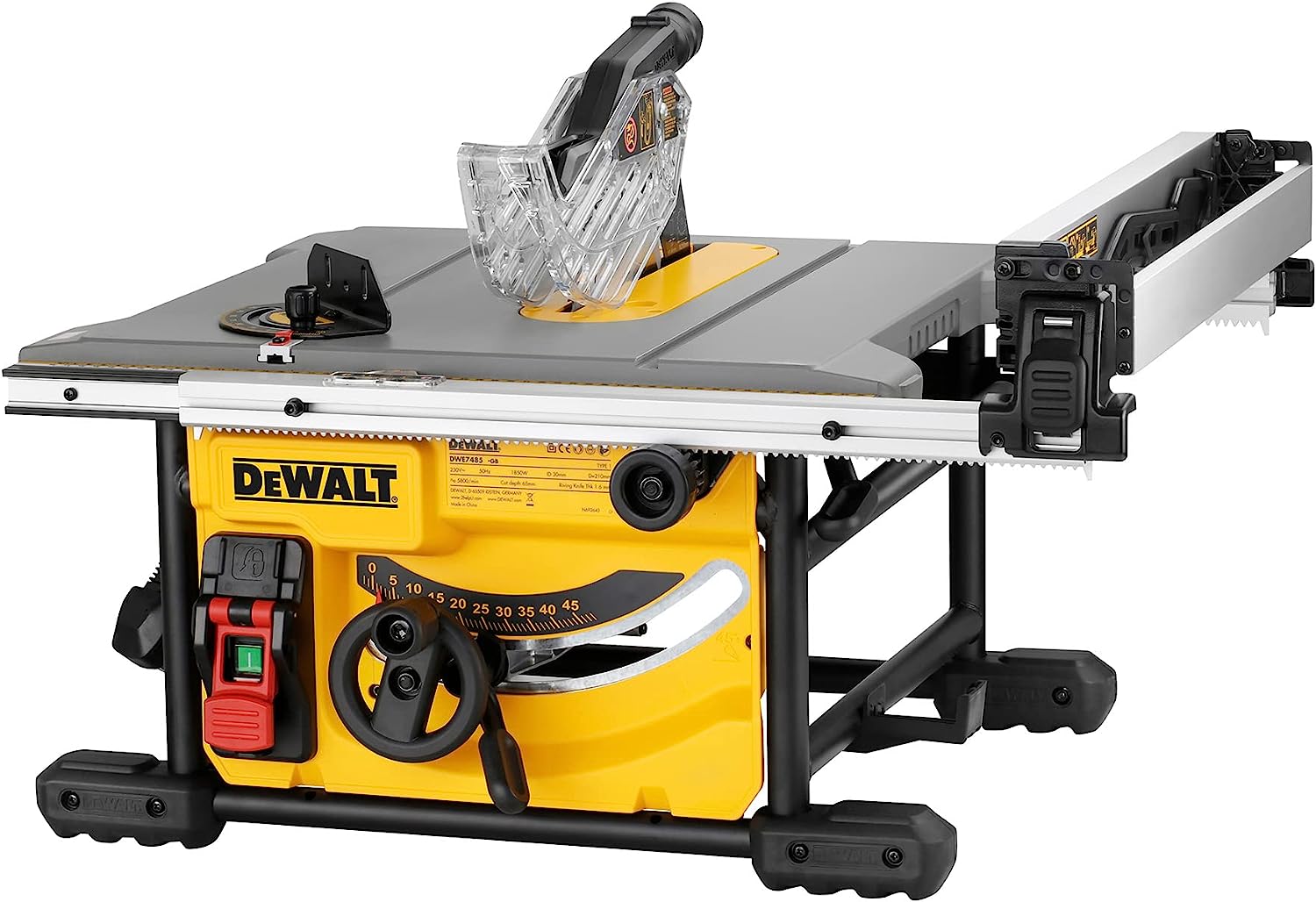 Benchtop table saws come off as lightweight tools and require an auxiliary structure or table for support.

These benchtop models, which are mostly used by DIYers and homeowners, have a directly driven universal motor, and its parts are made of plastic, aluminum, and steel, making them lightweight and compact.

The benchtop saw is the smallest and least expensive of most table saws and has a shorter rip fence while still maintaining good ripping capacity.

Cabinet saws have a heavy build and extensive use of steel and cast iron to reduce vibrations and improve accuracy.

They have an enclosed base, single to triple phase induction motors, and are used for cutting at home or for heavy-duty work on commercial and industrial sites, similar to contractor saws.

The blade insert is easily replaceable, and its simple design allows them to perform high volume, precise, and efficient work.

They also have a table extension, which increases ripping capacity and makes them more suitable for heavy construction.

A cabinet table saw is mostly used for ripping, which means cutting wood or large sheet stock in the direction of the wood’s grain.

Job site saws are a little bigger than benchtop saws and are used with a stationary or folding stand.

They are powered by 15-ampere electrical motors and are used on construction sites by tradesmen, contractors, or carpenters.

They are smaller and relatively light, making them easy to transport, and are built to be tough and accurate. The gears and motors are built to last and have improved alignment, miter slots, table extensions, and rip capacity.

Contractor table saws, often called an open stand saw, are larger, heavier saws usually fastened to a base with wheels. They have a motor mounted on a pivoting bracket that pivots off the back of the contractor saw and powers its blade with single or double V-rubber belts.

They are popular among homeowners and hobbyists as they can be powered by a regular power source and are cheap to run.

They were initially designed as portable saws with wheels before introducing the bench-top model to include better sawdust retention.

They are lighter than cabinet saws and have enough power and accuracy to handle large projects.

Compact table saws are a much smaller version of a regular table saw, which are mounted on a stationary stand. It has a universal-type motor that is driven by toothed belts.

It is usually small in size but may appear to be larger than the contractor saw at times. Some models have cast iron tops, an integrated miter sled, and a sliding miter table that is able to tilt to various angles.

The sliding table saw, also known as the panel saw, is a cabinet saw adaptation. They are used to cut long wood boards, panels, or sheets of plywood. They are the largest of most saws and have a three-phase induction motor.

They are used for ripping cuts through large materials and for cross-cutting.

Some sliding saws have a second, smaller blade mounted in front of the main saw blade to help reduce splintering of the lower face on certain stocks. A riving knife is used on this table saw to prevent kickback.

Choosing the appropriate blade for your cuts will make a difference in the long run. It will determine whether you get smooth, rugged, or accurate cuts. There are four types of blades: combination, carbide tipped, rip, and crosscut.

Rip blades are larger than crosscut blades and have chisel-like teeth. It also has deep recesses between the blade set teeth, but it isn’t as good for cutting across the wood grain as combination blades.

The versatility of combination blades is combined with the efficiency of specialized blades in the carbide-tipped blade.

Checklist And Things To Consider Before Buying A Table Saw

A table saw is a very powerful tool and also very dangerous if care isn’t prioritized when handled.

Make use of safety table saws or buy products with safety features such as a blade guard, push stick, miter gauge, or rip fence to limit injuries.

Begin by determining what you want to use the table saw for, this will help you decide what power needs, its size, and portability.

This would help utilize safety features and accessories to match your needs. The blade speed and arbor should be considered during purchase as it measures how fast work gets done and holds the blade in position when the blade rises, moves at different angles, or needs to change the blade height.

A quality rip fence would keep the material square to the table and fence system, while a blade cover and push stick would reduce the occurrence of injuries. For crosscuts, use the miter gauge and not the rip fence.

The miter gauge is an important accessory for making miter cuts so pay close attention when using it. A feather board will prevent kickbacks, while the blade guard and safety tips and features provided by the manufacturer would assure safety during operation.

The table saw is a useful tool for doing woodwork or small projects at home or on the job site. It’s a valuable tool to have in your workshop, and it’s primarily used by model builders, handymen, and hobbyists. Its popularity is attributed to its lightweight, portability, and ease of use.

The different blades produce different results, and those with smaller teeth are sometimes swapped for those that cuts through wood and panels of varying thickness. These saws also provide safety features along with other accessories.

To protect yourself from wood grains and sawdust, use a feather board, dust removal system, and ear protection. Always inspect the blade, blade guard, and power motor for safety and efficiency while in use. This is a powerful and versatile tool. It’s critical to obtain high-quality tools and adhere to safety precautions during operation.

ABOUTSAW IS A PARTICIPANT IN THE AMAZON SERVICES LLC ASSOCIATES PROGRAM, AN AFFILIATE ADVERTISING PROGRAM DESIGNED TO PROVIDE A MEANS FOR SITES TO EARN ADVERTISING FEES BY ADVERTISING AND LINKING TO AMAZON.